A definite highlight of my teaching career was also spent on tennis courts coaching our student athletes and making positive connections with students.  A fundamental rule for any tennis player is to stay out of “no man’s land”; the area between the baseline and the service line of a tennis court. 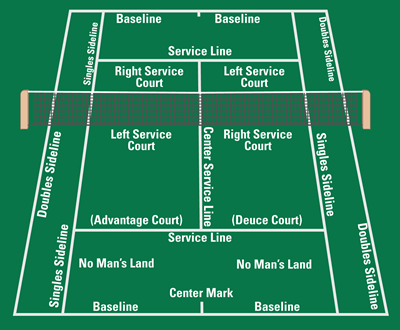 So, the goal is to either stay back at the baseline or play near the net.  Getting caught in the middle makes for hard shots and being less able to get to the ball.  As a coach, I saw players hesitate when making their move from the baseline to the net. They stop in the middle convincing themselves it is safe, while they wait for another opportunity to advance.  Instead, great tennis players realize that when you want to move forward, you have to commit and move with intentionality, or you’ll get stuck in “no man’s land”.

The same goes in leadership: when you commit, make your move forward and don’t get caught in “no man’s land”.  In order to help you not get caught in the middle, consider these 4 “But Not’s” to staying Out of No Man’s Land:

But-Not #1: Being in a meeting, but not speaking up.

Meetings are a chance to learn, clarify, communicate, dialogue, and discuss.  For whatever reason, it’s natural to make excuses not to speak up and share your opinion, point-of-view, or question.  By being in the meeting, make it your mission to be an active contributor. Avoid the parking lot conversations or “meetings after the meeting”.  Commit to using your voice to share your experience, insights, and point-of-view to help the team to make the best decision for students.

But-Not #2: Taking a leadership position, but not taking ownership.

Regardless of whether you have a formal title or not, we are all leaders in our areas.  At some point, we have to own our responsibility in the decision, the action, or helping to solve a problem or need.  There’s also a tendency to delegate things that might be out of our comfort zone. While we can’t be the expert at all things, it should still be our goal to learn and grow.  Commit to take ownership of decisions and areas in which you work to make it better for students.

But-Not #3: Managing issues but not leading others.

It’s easy to quickly get caught in the role of “putting out fires” that seem to come up constantly.  The same can be said about filling time just in responding to emails that come at all hours of the day and night.  While the emails and responding to issues will never go away, the real work is in moving forward to proactive action.  Commit to being proactive in developing and leading your team by addressing areas which support and grow all students.

But-Not #4: Talking about change but not executing them.

There’s a doom-loop mentality when we create meetings to plan for the meeting to plan for the meeting.  T-shirts and posters also fill the hallways with positive affirmations and slogans that bring power and energy for change to take place.  Yet, when action is necessary, there seems to be a void or disconnect between the conversations and the action. While gathering input and ensuring clarity is crucial before decisions should be made, it’s easy to get caught on the baseline unable to move forward.  Commit to making plans in how decisions will be made and communicated.

Tennis players playing out a point at the net is the most exciting.  The game is fast-paced, and the reaction time to respond is even quicker.  To get to the net, the player had to have made the commitment to run through no man’s land.  Once the decision was made to leave the baseline, doubt and uncertainty had to be extinguished.  Leaders making the decision to move forward have to possess that same unwavering commitment. The next time you decide to make your move, watch out for the “but not” trap in no man’s land.