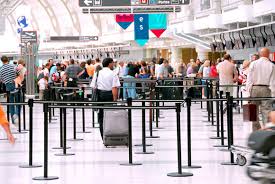 At least I got to enjoy the journey when I was little. The whole process was different, and it definitely helped that I could be a carefree child while my parents took care of the logistics. But now as an adult and living in a different era of safety, the thought of going to an airport gives me complete and utter stress. While I have taken it as a personal challenge to perfect my routine of getting from my car to the plane in the least amount of time, all the steps in between test my perseverance and patience (not to mention my germophobia).

While I tend to get aggravated at checkpoints as if they are a complete nuisance, I know they are set up to save time and keep me safe. Just as checkpoints serve a vital role in the airport for travelers, they also serve as important processes in helping teams to be most effective.

I have been a part of many teams that do a great job in the early stages of a task by developing goals and action plans. They spend time and effort up front in setting the course to a destination with everyone committed to the plan, and then they leave the planning meeting ready to execute. Left to themselves, they look at their part in the plan, interpret their step, implement it, and then wait for everyone else to do their part. And, at the very end, they reconvene as a team only to find out that they fell short of the goal while pointing fingers at each other for not doing their part.

Effective teams understand the importance of checkpoints in project planning. When they develop their goal, they also build in checkpoints into their action plan.  Checkpoints are a great tool to ensure commitment, reflect on the progress, and revise the action plan as necessary.

In their action plans, effective teams build in checkpoints to monitor their direction in order to meet their goal. Here are “10 Tips for Effective Teams Embracing Checkpoints”:

Once when I was heading back to Ohio from a trip, a flight agent discovered my airplane ticket was printed with the incorrect gate number. Had I not been stopped at a checkpoint, I could have gotten on a plane to Texas! Similarly, teams who build in checkpoints have the same opportunity to realize possible mistakes or potential problems in the future when they build checkpoints in their plans! So, instead of lamenting over checkpoints, embrace them and build them in to your team’s success plan!